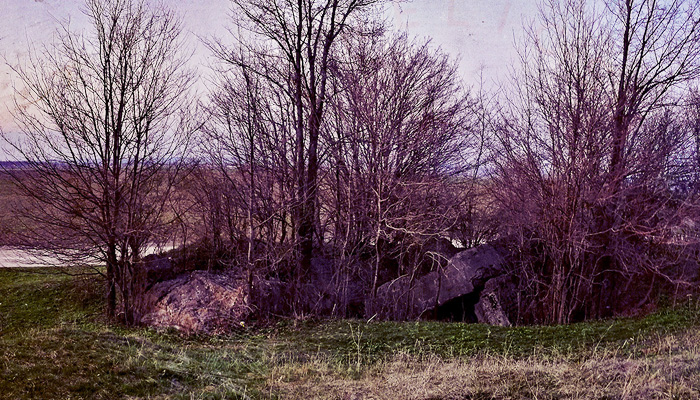 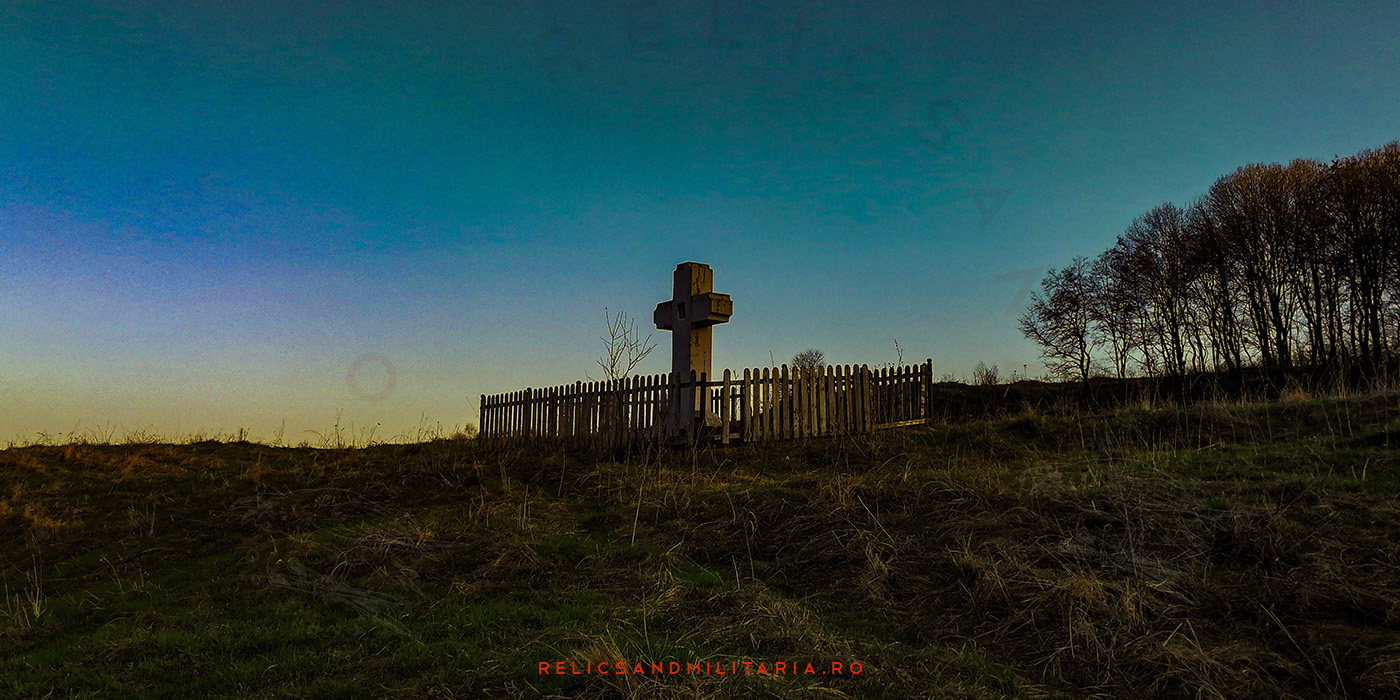 As always, reading a lot gets you closer to great metal detecting spots. Recently I’ve finished reading a book by Dan Ramf – “Our grandparents, our heroes”, a book full of war memories gathered from Romanian WW2 Veterans. The main interest for me was first of all learning more about the war – “first hand” from the soldiers, and second, to see if I can find some spots that could still have some world war two relics.

In one chapter the main hero is Ioan S., born in 23 July 1922, born in Tiur, Alba County, incorporated in the Tarnaveni 82nd Infantry Regiment on 4th of April 1943. He was also a POW in the Gulag for one year, but he was lucky to get back home. This is what he remembers about one place where he fought on the Moldavian Front in 1944, a place that gathered my interest and went to search some war relics. Here is a part of his story:

“On April 9, 1944, we were put on the trains and left for the front. I was a ZB machine gun shooter, that had a 20 cartridges magazine. In order to load the magazines faster, we had a refilling machine, and a soldier was always busy filling the clips. We also had 40 cartridges ones, but they weren’t that good, they didn’t push the bullet in the barrel that well. When we arrived in Moldova, we disembarked at Roman, our commander was Colonel Gross, he was Saxon. About him I heard he was shot by the Russians in Transylvania, he wanted to surrender to the enemy with all his regiment, I heard this from a soldier who was born in 1923 and was from our regiment. 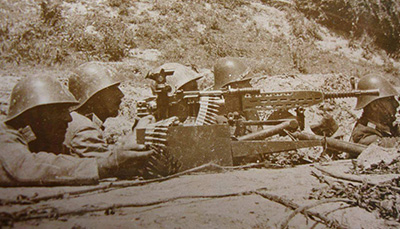 From Roman they sent us to wouldn’t you like to know, we arrived on the Resurrection Night (Easter) on April 14, 1944. Each group was accommodated in a peasant house; the people gave us red eggs. On the second day of Easter we went into the woods at wouldn’t you like to know, there the trees were so thick and tall that we could see the sun only in the afternoon. When the sun rays reached us, we got warmer and had a small chance to relax. We changed another regiment; in the area were concrete casemates and a bunker line, neighboring the forest. There weren’t bunkers in our vicinity, the forest defended us. The fortifications were made by those before us, we changed a company of mountain pioneers, who were part of a division of the Old Kingdom (aka “Regat” – it refers to the old Romanian Province). Also, monthly, we changed positions, others came in our place and so on.
The forest was on a plateau, before us the land descended, it was as our Tarnava shore, because of this, we didn’t see the Russians when they came. They could approach to 50 meters from us, and then our soldiers climbed the trees with guns and start “reaping” them.

In our area they attacked us mostly with the infantry. When we attack, the artillery helped us, they shelled, and then we can approach the enemy. We had artillery officers in an observer tower behind us, who set the shooting. On the Moldovian front they had us mixed, I had command of Toader Culbecea, he was from a village near Piatra Neamt. Culbecea was two years older than me, he was also on the Russian front to Stalingrad, there he was injured twice and, after recovery, they sent him on the Moldavian front. Joseph Pop was Platoon Commander for a while, he was a teacher from Transylvania, I heard he died on the Hungarian front. In my platoon there were two villagers, Gheorghe Rosca, sanitary, and Gheorghe Glogovetean, rifleman.

In our area, the attacks were fragmented, they didn’t attack the front all at once. The artillery and our infantrymen collaborated, we were commanded to shoot to the left, to the right, the others were luring or shortening the shooting. In front of us was the resistance line, the barbed wire was set on tree trunks finger or arm thick and the ground was mined. Sometimes, above us a gaunt Russian plane flew, crackling from all its joints. We were very afraid of the Katiusa because it was shooting straight, like a machine gun, but ours could easily find his shooting position. The trucks on which the Katiusa were mounted launched the missiles then fled. Their artillery was beating us, but they didn’t know where we were, we were hiding in the woods. 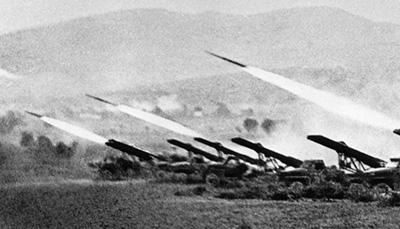 We didn’t had any tank attacks in our area. We had a tank buster crew with us, our group commander had a cousin that was part of them. This caporal, when the tanks attacked, he had to destroy them. A colleague told me that he saw him when he destroyed one. He had a round big-bottomed dug pit and he was hiding in it. The tank crew did not see him until they reached 20 meters from the pit and, after they passed over him, he was getting out with the Molotow Cocktail, threw it on the engine and lit them up. This colleague did not brag about this, he was afraid of the Russians.

The Russians made all sorts of attempts to our left and right flanks, but they failed to break the front and encircle us. In our front position, they never broke the line. They attacked us in the outposts, on a narrow ridge, where they were shooting with automatic weapons on the whole line. The Russians had a lot of soldiers, but they wern’t trained like us. Out of our ten men group, we remained six. Two were injured, one was moved to the tank busters, and another was pulled back. We attacked where the Russians were placed as a nail in our line. To fool the Soviets, we started an artillery attack in front of us, behaving as the attack would be given here. The “H Hour” was secret; the officers were telling us only before the attack. 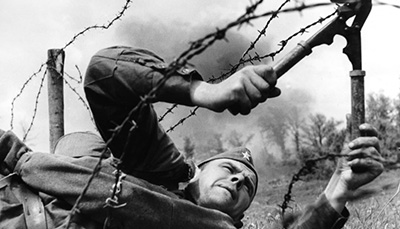 At the beginning of May 1944, our artillery strongly shelled to the right and when we reached the Russian positions, we found only thrown weapons, dead people, feet and hands, our artillery shred them to pieces, the infantry had no one to fight. On the Moldavian front we were sheltered in huts dug in the ground and covered with two or three rows of thick tree trunks and then covered with a layer of earth.

We slept in turns, like rabbits; in the outposts we dug ditches deep to our throat. In front of our position, at about 20 meters, we dug with the Linnemann shovel a deep ditch so we can sit on our back all night. We stood and watch so a Russian spy would not pass in our trenches. In the morning we got back in our shelters, we were not cold because it was summer and we were young.”

Then the research started – first, on Google Maps and Earth, and after that on old German and Russian Army Maps. The fact that on the satellite pictures there were trenches still visible was no surprise, unbelievable fact appeared on some 80’s Romanian Army era military Maps. In the area there was a spot on the field, near the forest, named “La Anticar” (“At the anti-tank” ). This gave the veteran’s story that passage across time, the villagers from the area gave the spot a reference and used it over the years as a local orientation expression. 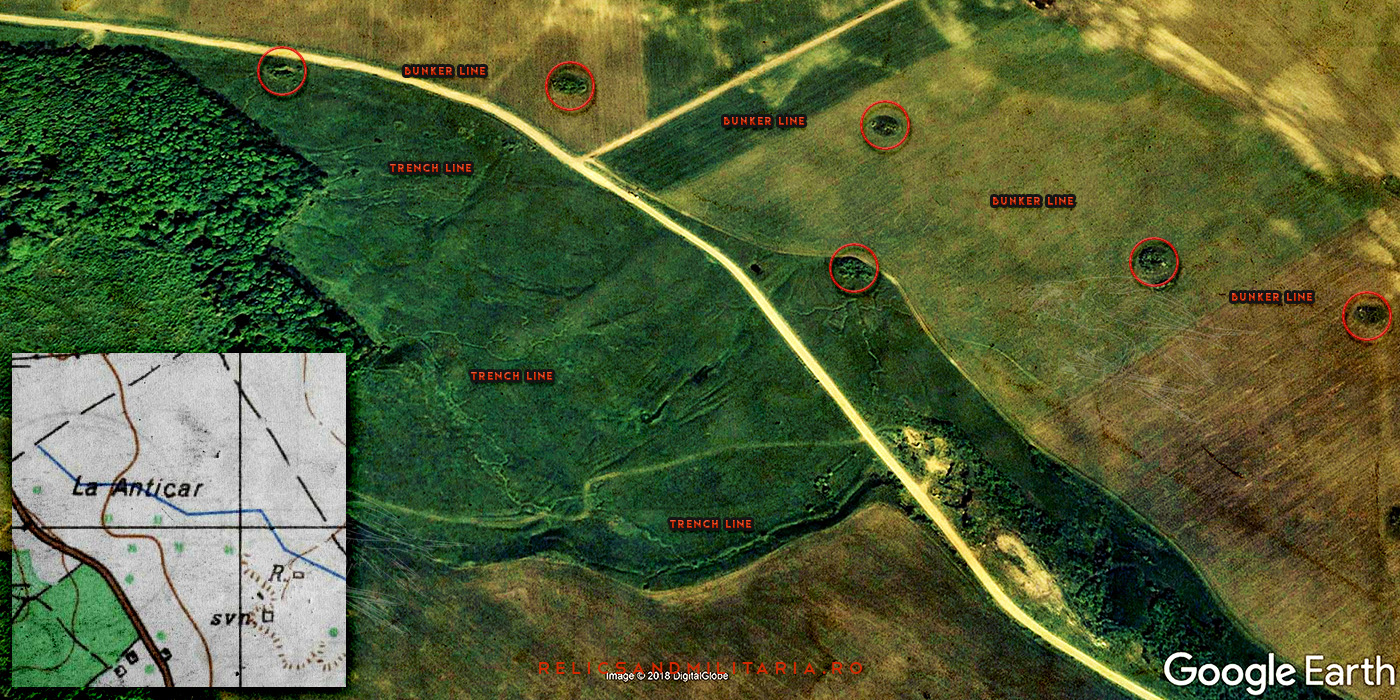 When I got in the area, we searched the area. At the footstep of the small hill a small cross honors all the soldiers that fought and died in 1944 in that place, sadly, no it had no plaque on it to tell us more. As our veteran recalls, bunkers were near the forest and on the plain, but they were all blown up. The forest was full of trenches and fox holes but we couldn’t find more than some empty Romanian 7.92 bullet casings and a Romanian Voina 120 mortar cap, probably the whole place was cleaned by the Civil Protection Units. It doesn’t matter if we found relics or not, the whole process of reading, research and going into the field and finding the places the veteran remembered was golden. 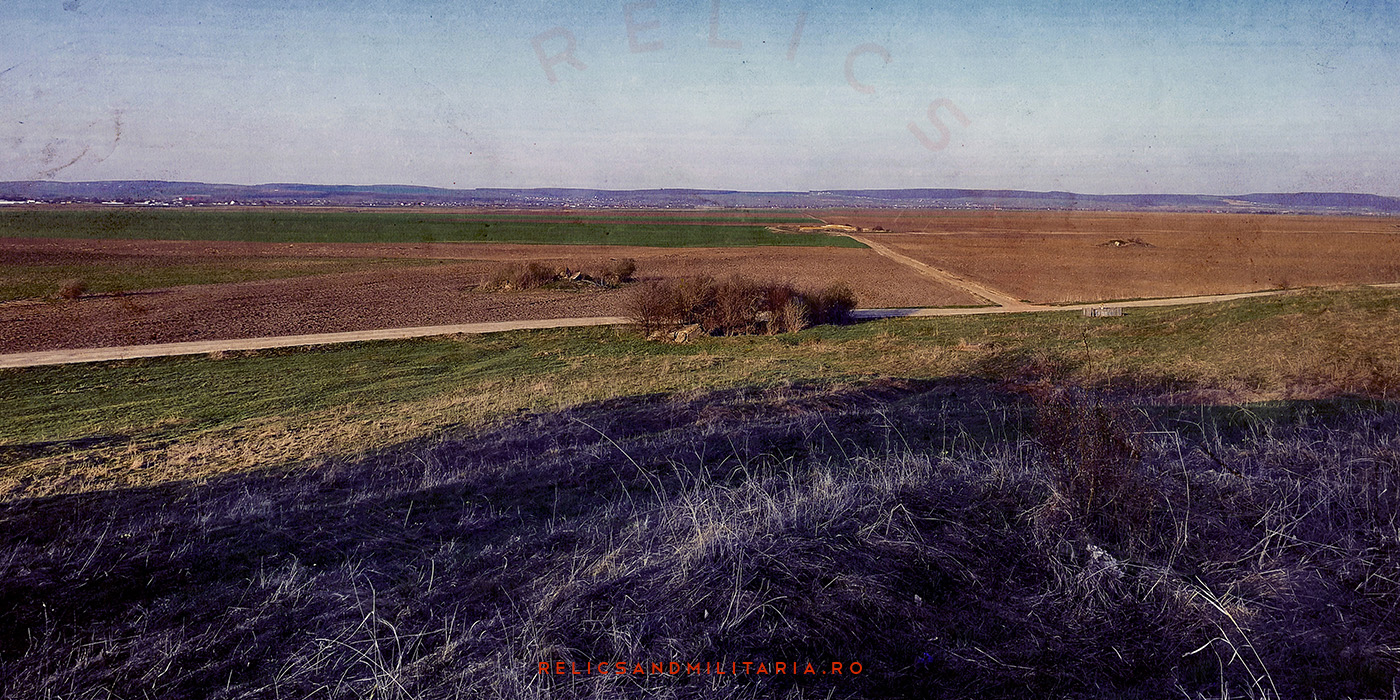 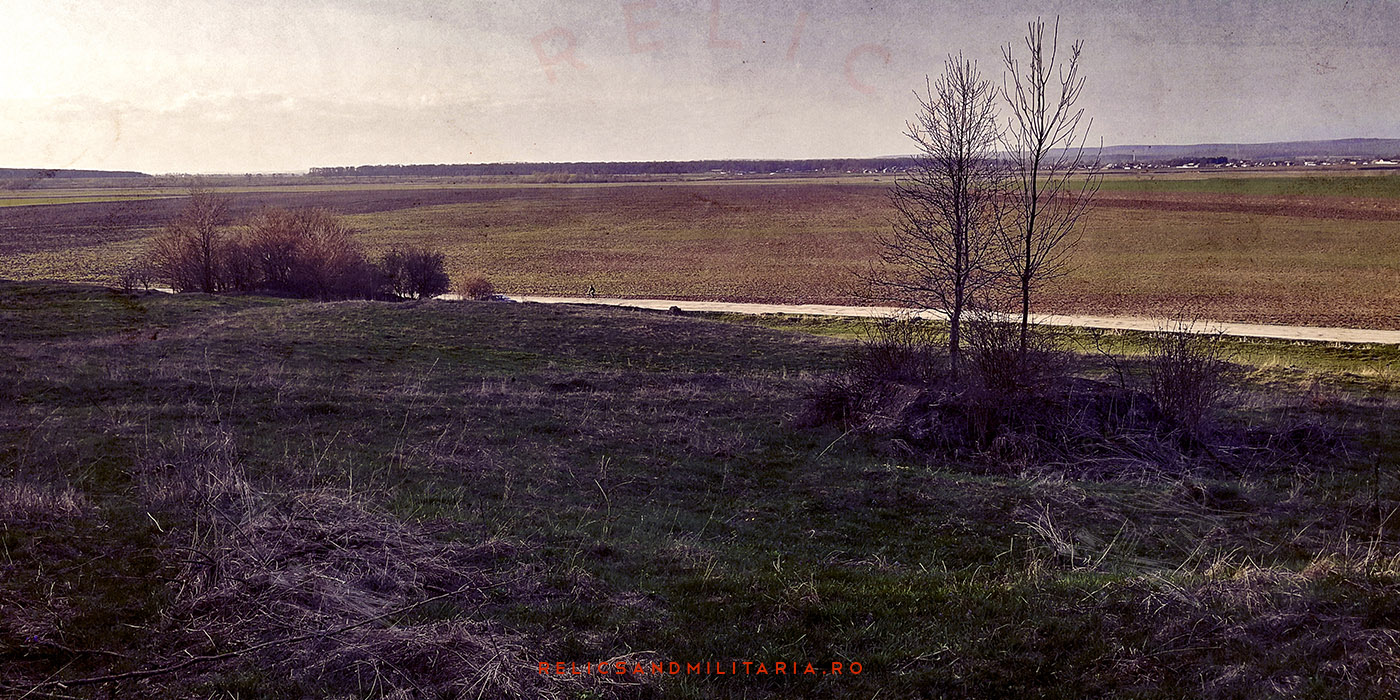 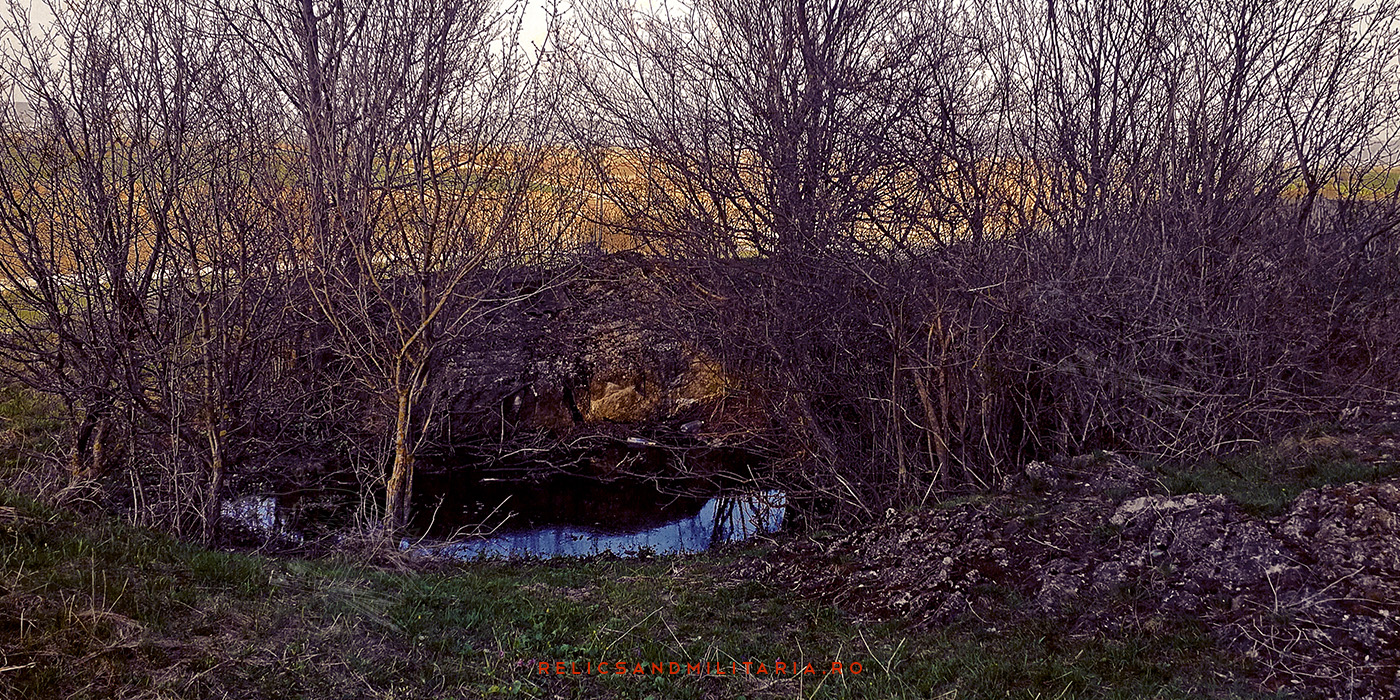 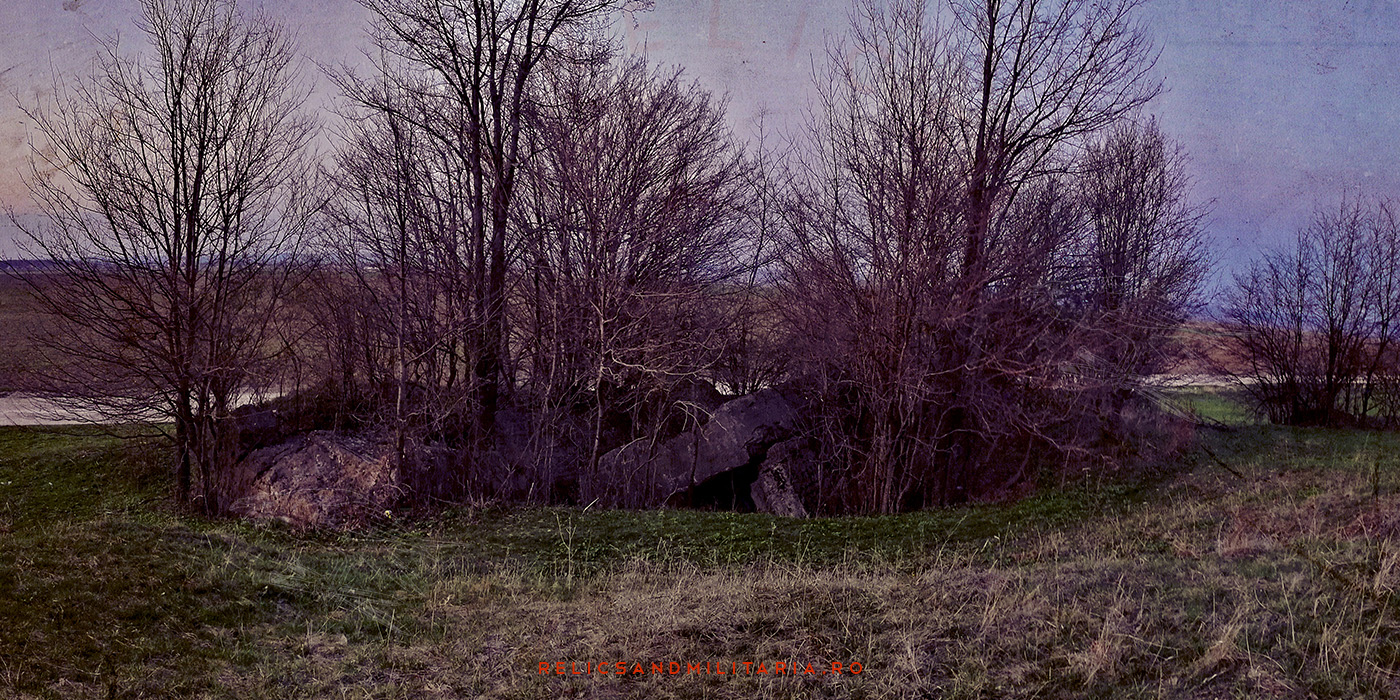 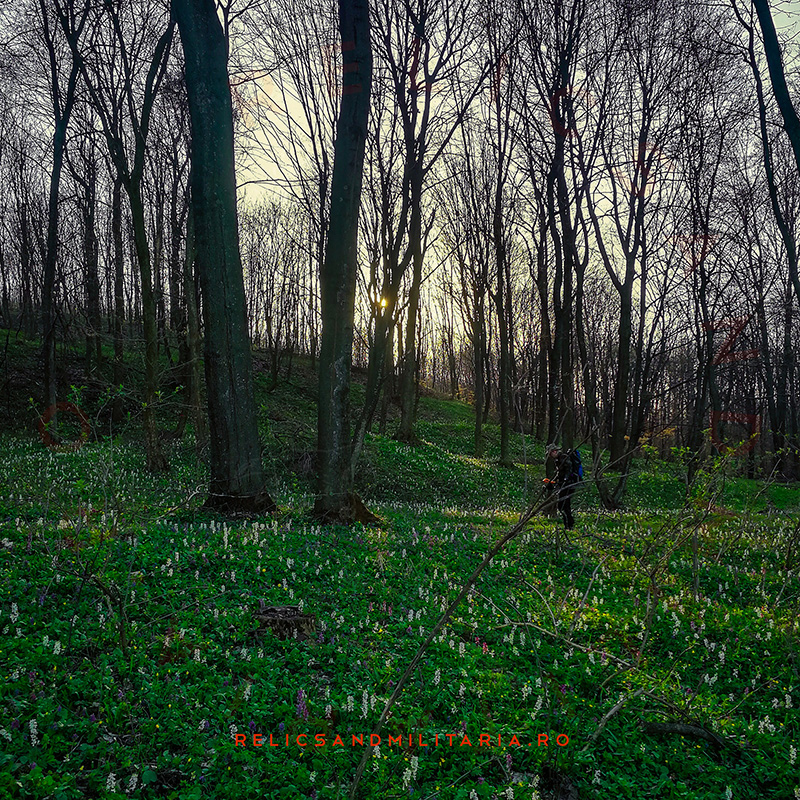 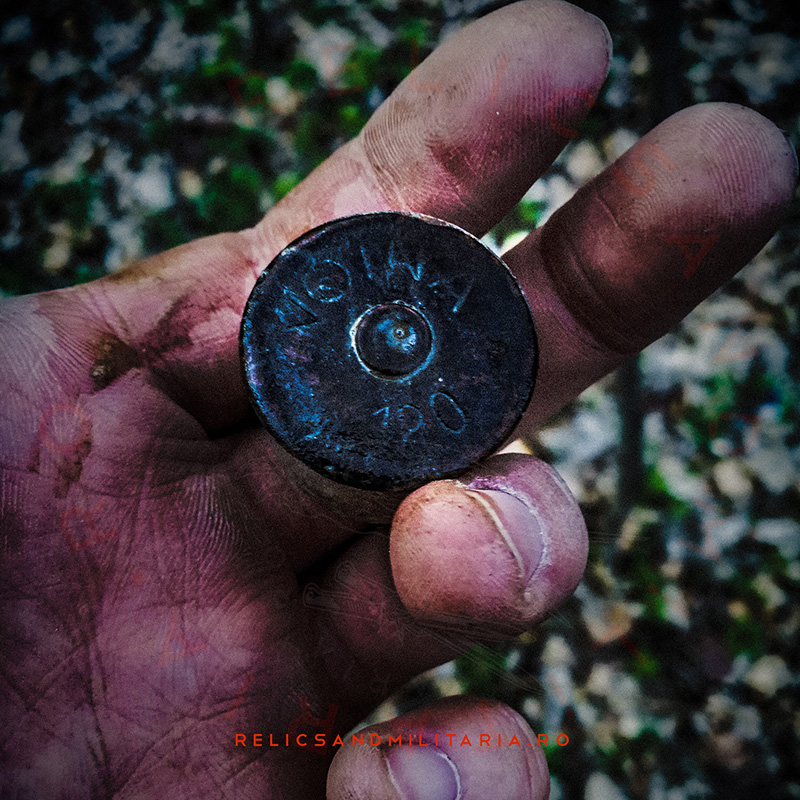 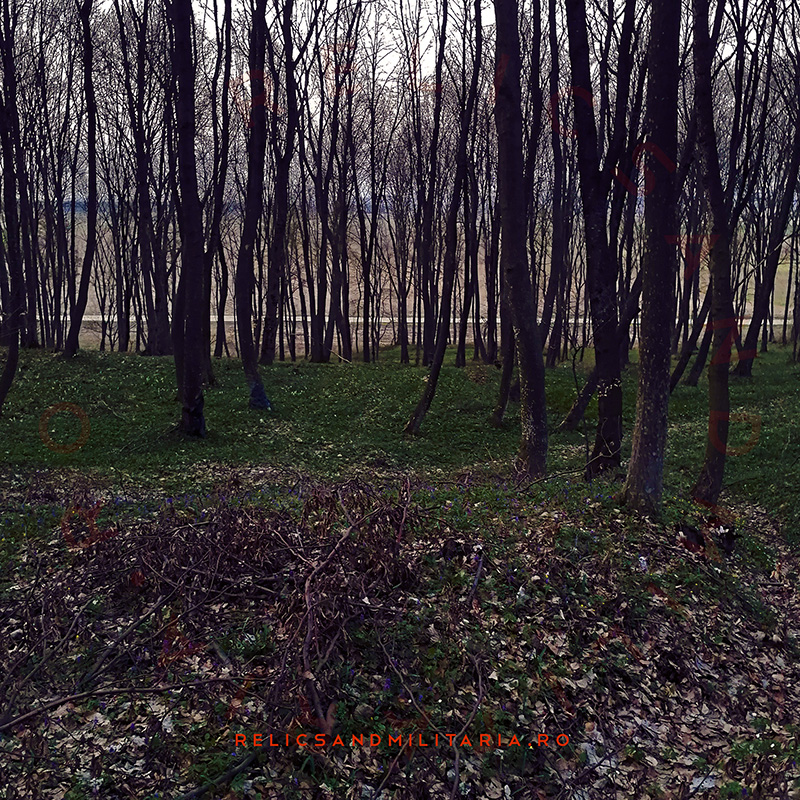 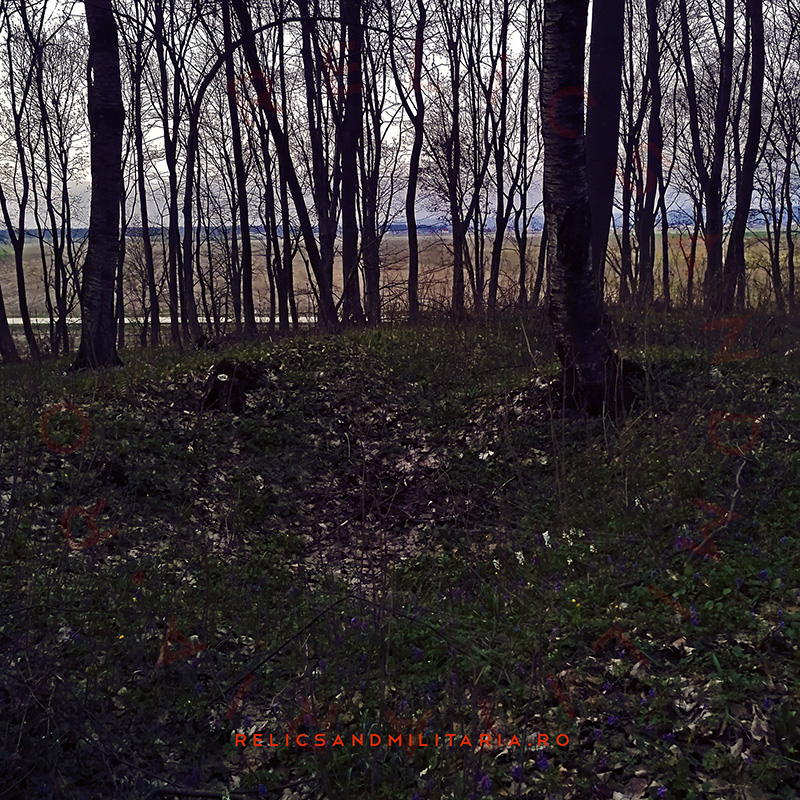 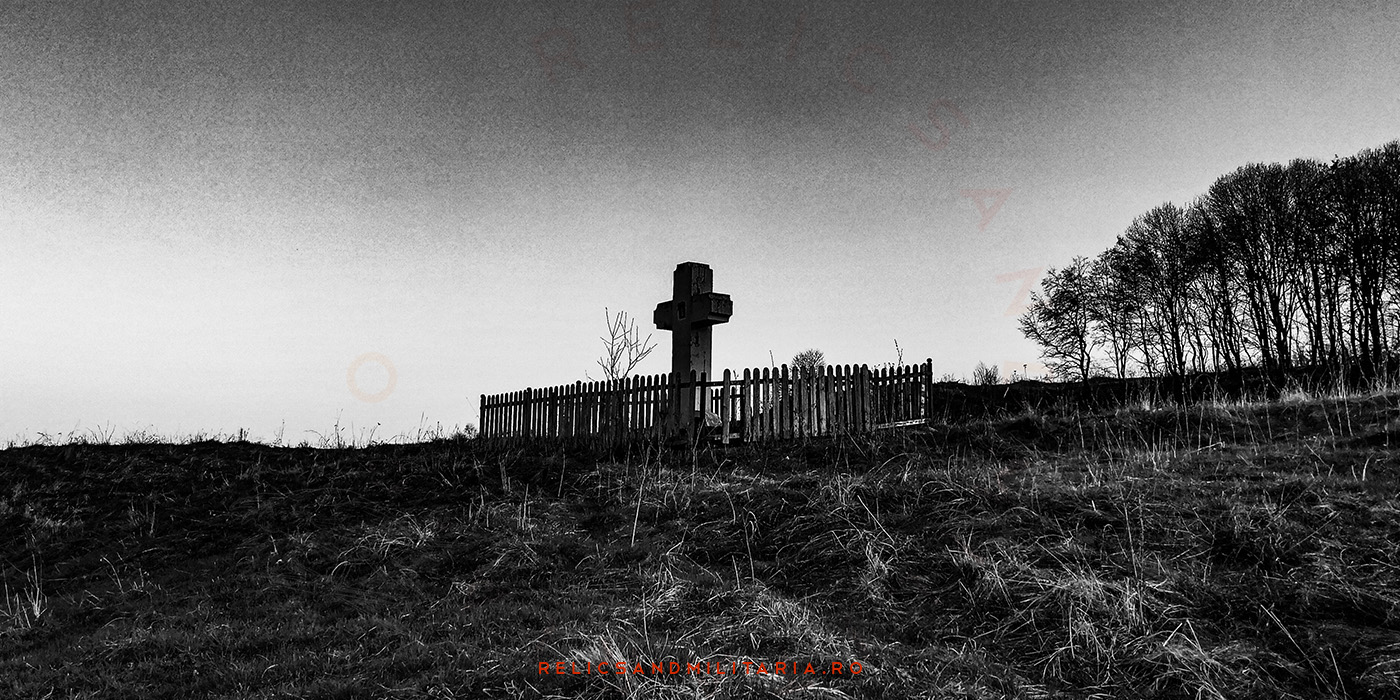 More about the bunker line in Romania I will discuss in a new article, soon.