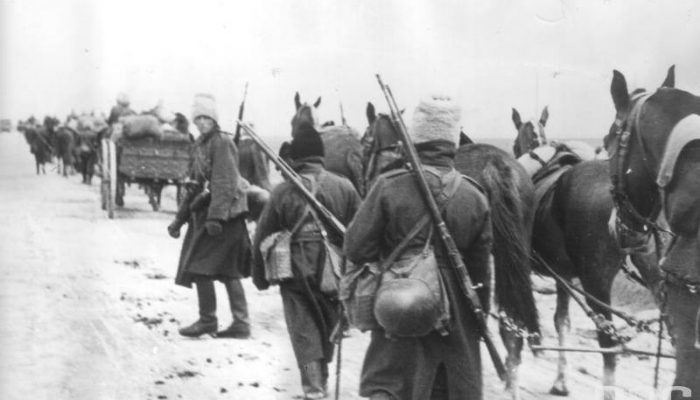 Excuse the language, but the question still remains – what were the leaders of that time thinking when they decided both in 1916 and 1945 of entering the wars. We are not going to talk (in this article) about the utopian thought of The Great Romania, uniting all the historical provinces: Wallachia, Moldavia, Transylvania, Dobruja and Bessarabia.

To keep it short, in all it’s history, the romanian armed forces had the common conscripted soldier from the rural areas, mainly peasants. When you look at photos of the era in western military powers, you would see some educated men, most living in modern cities, dressed in sharp looking clothes, but when you look at romanians, you see men wearing wool hats, linen clothes with leather moccasins, plowing the fields or raising sheep. They never seemed to be interested in what was modern at that time, and this trend remains alive nowadays, they like to keep it simple, not caring about anything around them. On the other side, the army NCO’s, all the beautiful men dressed in uniforms, shiny leather boots, on horseback, mimicking what they saw as a trend in capitals like Vienna, Paris or Berlin. Most of them were burgeois, wealthy and had no experience with the countryside or the overall situation of the nation.

From the boulevards of Bucharest, where everything looked modern, it was easy for them to think that Romania was a great country and the King was a smart guy. Many of the leaders of that time were corrupt, they had business with the Royal Family, and all the sons of nephews of those businessmen gained army positions that they didn’t deserve. This became a fact when the war started and they were sending men to the slaughter with no idea of what they were doing. Maybe, big words like “No retreat, fight till the last man!” were heard all over the battlefields, but the problem with romanian soldiers was the lack of equipment, and we all know that the right gear, gives the soldier the comfort that can send him into battle confident of winning and surviving the attack. Look at the pictures and tell me if this is the proper gear that a soldier should have. This is a joke!

As someone once said: Not the war killed romanian soldiers, but their leaders did from sending them to certain death.

If some romanian historians will read this they will start and yell that this is bullshit and that the romanian soldier was and did and bla-bla. I don’t say that the romanian soldier wasn’t great, I’m saying that more of them would have made it, if things should have been analysed better before entering the war. With all the lack of equipment and food, differences between the meals of the simple soldier and the officers, the fact that physical punishment was still present, the romanian soldier, had the ability to endure and endure and think that it will be over one day and everything is going to be fine, he will return to his village, make schnaps and wine every autumn, wait all winter for the spring to come, work the field, raise animals, gather the harvest, and still not to care about anything. A veteran that survived Stalingrad and the work camps after being captured, once said that all he though about was returning back home and eating polenta until he was fool.

My grandfather and his brother from my dad’s side both fought in ww2. They lived in a village in the countryside near Buzau. They were both lucky to survive the war, but his brother was captured by the Red Army and sent to the work gulag and when I met him he was a wreck of a man. I was too little to be interested about the war or to understand what happened to them, and now,sadly, it’s too late to hear their stories, but I had the chance to see their body language and their emotional state. My grandfather smoked heavily and swore all the time, woke up early everyday, slept under the clear sky, on a bed, outside in the courtyard all spring, summer and autumn, ate all kind of food, even if it got rotten. His brother used to stay on the porch all day, and wasn’t able to do any kind of work. He turned blind in his latter years.

I will end with some pictures of some veterans. You will see what kind of respect they recieved from the country they risked their life for. Respect to all of them for dying in war, to bad they suffered so much because of the incompetence of the political leaders that sent them to certain death.